Many of you are beer lovers! That I am sure of. So am I!!

Actually, I never really liked beer until I spent some time in Germany. There, I have tried many kinds of beers, many of the German and world’s best. When I came back to Japan, I have a chance to try many Japanese beer and found that, they are not bad at all. Ebisu, especially is one of my favorite.

One of my friend told me about this Ebisu beer museum  (in Japanese it would be more appropriate to called 記念館 or memorial hall) in Tokyo, of course I have to go there. The museum tour itself is free of charge but you can taste 2 kinds of beer for extra 500 yen charge. Advance reservation required.

Check at the end the blog of links to reservation page.

The museum itself is located on the underground floor of Ebisu Garden place, about 10 mins walk from JR Yamanote Ebisu station. (and FYI, station was named after the beer not the other way around). I made it there just 1 min before starting time. Please remember that you have to be there 10 mins before tour starts.

The tour in the exhibition area takes 20 mins. Explanation is in Japanese. However, the sign and other visuals in the museum is bilingual, English and Japanese.

Ebisu beer packag when it first launched in 1890

Ebisu beer is made by Sapporo breweries which has its origin in two branches. One is the Kaitakushi Brewery opened in Hokkaido which launched Sapporo beer and Japan beer brewery which launched Ebisu beer.

In 1928, the name of “Yebisu” area and staion was adopted from Yebisu beer like I told you earlier

A bottle of beer cost the same as 10 bowls back then. Very expensive.

The other parts of the exhibition is also very interesting.

Autumn limited beer (in red can) is made from Chrystal malt, 4th from left in below photo

This is standard all malt Yebisu beer, gold label

How the great-tasting beer is made.

(Adapted from the museum flyer “Let’s talk about beer”)

By the way, according to our guide, the taste of Yebisu beer is very close to German beer as it’s made from German recipe (I think…).

I didn’t plan on spending money but obviously I couldn’t resist! Tasting glass (290 ml) is 190 Yen only.

You can enjoy other kinds of beer at Tasting salon next to souvenir shop. Food is available too in case you are hungry. It took 45 mins for the tour. I didn’t expect anything from this visit but I had a great time!

If you stuck in door because of the rain, this is a place I’d recommend.

See you next blog!

Originally I planned to post this blog on my office blog but for legal issue I can’t post it. So I decided to post it in my personal blog instead. *** 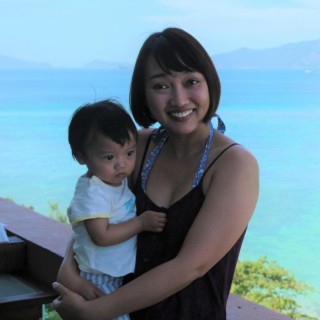 A proud Thai living an extraordinary live in Tokyo, mother to a little boy and 2 Papillon dogs. I love travelling and occasionally an inspired-chef.